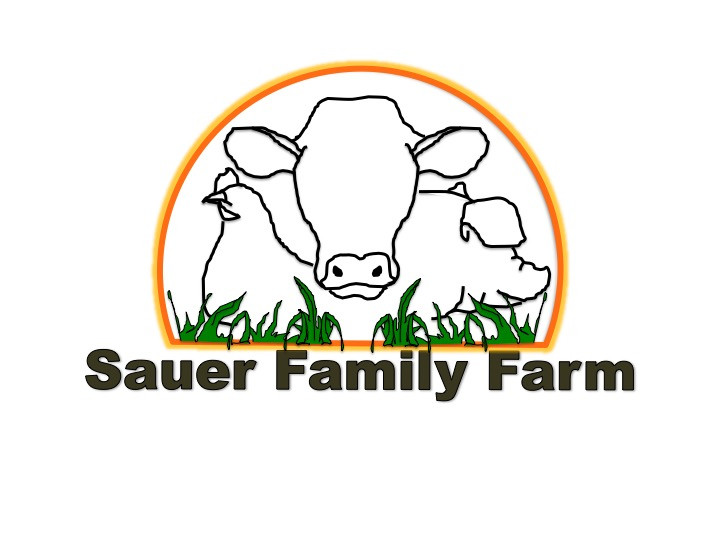 Sauer Family Farm is a third-generation farm owned and operated by Eric and Cheri Sauer.  The farm is located in eastern Harnett County, North Carolina on land farmed for two generations by Cheri’s Grandfather and Father.  Eric developed his passion for raising pastured poultry several years earlier when he and Cheri brought their family back to North Carolina to reside on Cheri’s family land.

Eric’s farming passion took root in the summer of 2011, when he began raising meat chickens on pasture as an exploratory journey to find clean, quality pasture-raised meat for his family.  Yes…the documentary Food Inc. had both Eric and Cheri dumbstruck at the lack of quality in the food they were feeding their family.  Eric raised 100 broilers in Joel Salatin style pens successfully and in 2013 the family farm size increased with the purchase of additional pastureland from relatives.  Soon pastured laying hens and forage finished beef cattle were added into the farm’s portfolio.  In 2018, Eric began Sauer Family Farm in order to provide our friends with the same quality of forage finished food.  In 2019, Eric added Ossabaw pigs and turkeys to the farm.

The farm is growing but it has had challenges in developing a local market for forage finished food. The sticker shock of our beef and chicken was and still is the main barrier to local consumers purchasing the products.  With persistent local market presence, educating consumers of the health benefits, and the reputation of the high quality of the forage finished products, Sauer Family Farm has started to breach the sticker shock barrier.

This year we increased our production capacity and introduced home delivery capability.

The farm positively impacts the local environment.  Pastureland once idle or is offered for use to grow and environmentally benefit from livestock operations.  Soil and resultant forage improvement are the main benefits being exhibited by the farm’s use of the land.  Partnering with local farmers to combine enterprises and assist with their soil building strategies through cover crop/forage use and livestock depositing their manure to increase organic matter and nitrogen. All with the goal of positively impacting the local soil health to grow healthy crops and help farmers move away from herbicide and pesticide dependency.

Sauer Family Farm will continue to grow high quality, clean forage finished beef, poultry, and pork products for a healthy food network. It will also continue and look to expand its ability to improve the soil through pasture-based livestock operations.

Our mission is to provide good, clean, local food at an affordable price.

Our vision is to use forage-based livestock operations to improve food and soil quality.

Early explorers brought livestock to the Americas beginning in the 1500s, including pigs that escaped or were deliberately set free in the New World. These pigs were the foundation for the historic populations of pigs in the southern United States. One of these is the Ossabaw, a free-range breed that is found on Ossabaw Island, off the coast of Georgia near Savannah. There is historic agreement that Ossabaw Island hogs have descended from foundation stock brought by Spanish explorers, inferring that the pigs are Spanish in origin. However, DNA analysis suggests that the Ossabaw Island pigs came from the Canary Islands, an important stop by the Spanish and Portuguese explorers en route to the New World. Mitochondrial DNA (mtDNA), which comes only from the maternal side, showed that the mtDNA of the Ossabaw Island pigs is more like that of the pigs on the Canary Islands, which reflects the influence of Asian pigs. The mtDNA of Spanish (or Iberian) pigs reflects only European influences. Additional genetic research is needed to understand the relationship of the pigs on the Canary Islands and on Ossabaw Island with Spanish pigs, including the paternal side of the DNA picture.


The Ossabaw pig breed is unusual and important for three reasons. Its history as an isolated island population has meant that the Ossabaw is the closest genetic representative of historic stocks brought over by the Spanish. Second, the presence of pigs on Ossabaw Island provides scientists with an exceptional opportunity to study a long-term natural population. Third, the Ossabaw breed is biologically unique, having been shaped by natural selection in a challenging environment known for heat, humidity, and seasonal scarcity of food. Ossabaw hogs may be as small as 100 pounds, but they are able to store astounding amounts of body fat in order to survive during the seasons when there is little to eat. This biochemical adaptation is similar to non-insulin dependent diabetes in humans, making the pigs a natural animal model for this disease. The pigs are also highly tolerant of dietary salt. Ossabaw Island hogs on the mainland, once removed from the selective pressures of their island home, have lost some of their unique survival adaptations. Their ability to fatten is both an advantage and a disadvantage, and breeders must watch their feed intake to prevent obesity.


Ossabaw hogs are usually black, although some are black with white spots or light with black spots. They have adaptations harking back to their history before being re-introduced to domestication. Adult pigs are very hairy with heavy bristles on the head, neck, and topline. The frayed tips of the bristles, a primitive characteristic, are another indication of the distinctiveness of the population. Their snouts are long and slightly dished. Heads and shoulders of the hogs are heavy, and while they seem out of proportion to the rest of the body, that impression belies the speed and agility of these animals in the dense undergrowth of the island. True Ossabaws do not produce the striped piglets typical of populations that have had Wild Boar introductions.


Though pigs have lived on Ossabaw for several centuries, they do have an impact on the island’s ecology. Environmentalists became concerned, and the pigs may or may not be allowed to remain. The fate of the breed now rests upon complex questions of how it will be managed in its habitat without having a negative impact on the island’s ecology. Ossabaw Island pigs have been well established in domesticated herds on the mainland since the 1980s. They are found to be particularly well suited for sustainable or pastured pork production.

Here are a few videos of our pigs in action:

We raise Turkeys for Thanksgiving.  The Breed is the Ridgeway Broad Breasted White purchased from Ridgeway Hatcheries, inc. Raised on forage with high-quality non-GMO feed.